As of the 14. of April it is official that the international 420 Class has decided to cancel the World Championship. Both the World and the European Championship might be postponed to a later date in 2020, but currently nothing is certain.
Stay safe and healthy!
Eingestellt von Yannick K. um 15:00 Keine Kommentare:

Unfortunately the Swiss 420 association has to inform you that the European Championship 2020 of the 420 and the 470 class will not take place in Gaeta at the 25th of July.
Eingestellt von Yannick K. um 19:10 Keine Kommentare:

The Swiss 420 association committee has decided to suspend any further selection processes.
All boats, that have inscribed for the selection for the European & World Championship 2020 will participate in the chosen regatta, disregarding the selection ranking. Switzerland has enough spaces at each championship, that every inscribed boat may participate anyways. This way no teams will be disadvantaged.

Due to the virus cover-19 the regattas in Neuchâtel and Crans have been cancelled.

CSP Lugano has been cancelled

Unfortunately, due to the lack of inscriptions, the CVLL decided to cancel the planned regatta this weekend (14. & 15. March). Please inscribe for the next CSP in Neuchâtel.
Eingestellt von Yannick K. um 10:15 Keine Kommentare:

We are happy to inform you that the inscription form for the selection process of 2020 is online.

Click here for the inscription form, including the informations about the selection of 2020

The registration for the PM Oberhofen is open. Click here to get all information about the regatta and here if you want to do the inscription.
Eingestellt von Nilo Schärer um 18:47 Keine Kommentare:

The Notice of Race and the Sailing Instructions for the CSP Thalwil are online and the Inscription is open.

International Swiss Championship 2019 - NOR and Inscription

The Notice of Race for the International Swiss Championship in Oberhofen is online and the Inscription is open. 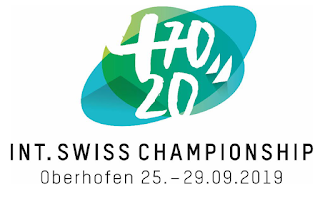 A total of 11 races were sailed in 6 days. Most of the races sailed were fair, the conditions varied a lot and sailors had to look around to gather as much information as possible.
The committee was eager to make every day their scheduled races and pushed it to the limit. For example the last qualifying race for the blue fleet started at 20:15! The course was well set up and most of the time the committee didn’t waste any second. As soon as the conditions allowed it, the committee tried their best to start a fair race. The last day the committee managed to start a race at 16:55, even though our last possible start was at 17:00. We can say that the committee did a great job. 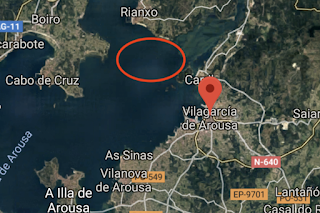 We sailed in area B, situated in the red circle. There is an island located to the east of the sailing area, a river arriving in the see in the north-east of the area and many pontoons, where local Fishermans cultivate many mussels. These pontoons modify the current and disturb the wind. The area was very tricky. The 470s sailed closer to the harbor under area B, in area A. The 420s also sailed 2 races in area A - the last qualifying day and the last final day - as the wind wasn't strong and stable enough in area B.

During the regatta we had wind from nearly every direction; North, North-East, South, South- West and for a short period of time West. The current varied a lot during the day. It depended mostly on the tide, if it was going in or out. The river played as well a big role in the current. If the current was coming from the south direction, it was possible to escape a little the current by going behind the pontoons on the left or to the shore on the far right. Waves were small but choppy - depending if the current was coming with or against the waves. The Swiss 420 Team managed to comprehend the racing thanks to the training week before the juniors and the few training days before the regatta.

In the open 420 fleet, the first Swiss Alexandre and Siméo - who finished 20th - and Nilo and Nik - who finished 22nd -  managed to make a decent result. Samira and Natascha finished 43th overall in the gold fleet. Simon and Niklas finished 67th, Janik and Christian 75th and Leon and Nathan 79th.
In U17, Maxim and Luis managed to do a good 16th position and Malin and Myrlin where 29th and 11th woman in U17. Ben and Yannick finished 31st.
To conclude: All Swiss Sailors sailed their best and showed that there is potential and we will come back stronger next year!

Achille Casco and Elliot Schick finished 11th at the ISAF Youth Worlds in Gdynia (POL) 2019, while Natascha Rast and Samira Rast took the 7th place in the women's fleet.

After some training days, the measurement and the opening ceremony, the World Championship in Vilamoura kicked of on the 6th of July with strong winds and big waves. Six races for each fleet were scheduled and also completed for the qualification series. Nilo and Nik reached the Gold Fleet in the Open Category without big problems, while Alexandre and Siméo had to wait until the last protest was held, so they could move up into the Gold Fleet. Achille and Elliot performed under the expectations and did not reach the Gold Fleet, as well as Leon and Nathan. In the Womens Fleet, Natascha and her sister Samira successfully qualified for the Gold Fleet, while Fiona and Sophie ended up in the Silver Fleet because of only two points. Ben and Yannick and Malin and Myrlin qualified themselves for the Gold Fleet in the U17 Category.
After a lot of wind at the beginning of the Championship, the Final Series were sailed in much lighter and more shifty conditions. Unfortunately there was absolutely no wind on the fifth day of the worlds. At the end, 10 races were sailed with a medium good performance of the Swiss Team. With a second place in the last race of the regatta, Malin and Myrlin finished 24th in the U17 Fleet. Ben and Yannick couldn't perform on the same level as they did in strong winds, but finished on a good 27th place. In the Girls Fleet, Natascha and Samira ended up on a strong 12th place. Fiona and Sophie finished second in the Silver Fleet with a consistent performance in the Finals. In the Open Fleet Leon and Nathan finished 5th in the Silver Fleet (50th overall) and Achille and Elliot 3rd (48th overall) by winning 3 of 4 races (unfortunately one of them was UFD) in the Finals. Alexandre and Siméo ended up on the 40th place. Best Swiss Team were Nilo and Nik on the 32nd place overall, in a very strong and high level fleet, which was won by Martin Winzer and Pedro Ameneiro in front of the defending World Champions Seb Menzies and Blake McGlashan. Vita Heathcote and Milly Boyle won the Womens Fleet and Odysseus Spanakis and Konstantins Michalopoulos are our new World Champions in the U17 Category. We're looking forward to some good performance of the Swiss Team ate the ISAF Youth Worlds this week and at the Junior European Championship the next week!
Eingestellt von Nilo Schärer um 18:41 Keine Kommentare:

Achille Casco and Elliot Schick won the selection in front of Natascha and Samira Rast. Because of their impressive performance at the CIMA, Maxim Dneprov and Luis Zimmerli finished on the third place. Sophie Mosegaard and Fiona Schärer and Nilo Schärer and Nik Burkhard complete the Top 5.

With two races in Ascona, the selection 2019 got to an end. Unfortunately, the Lago Maggiore didn't show it's best side. Saturday the wind was very shifty and two of four races had to be abandoned. The next day, the lake was like a mirror for the whole day.

After Saturdays two races, Achille Casco and Elliot Schick won the last regatta of the selection with 4 points in the general. Nilo Schärer and Nik Burkhard nearly managed to win the third PM in a row, but failed by just two points. Malin Karlsson and Myrlin Tappolet completed the podium with also 6 points. 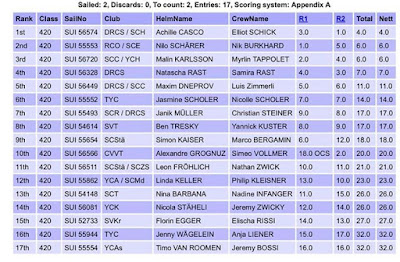 The next days, the selection ranking will be published and we will announce the national teams for the Junior European Championship and the World Championship. Stay tuned!
Eingestellt von Nilo Schärer um 10:25 Keine Kommentare: 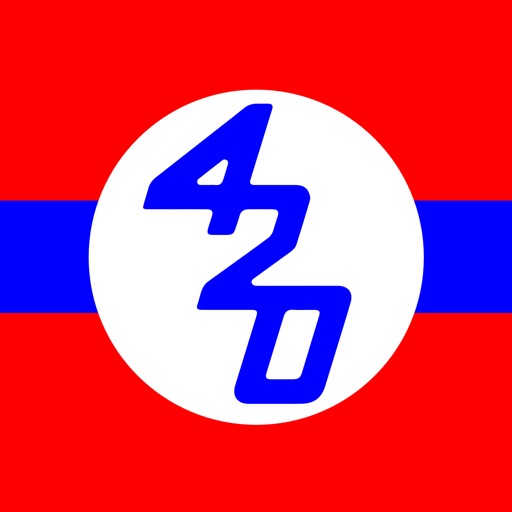 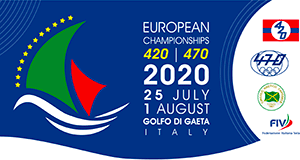 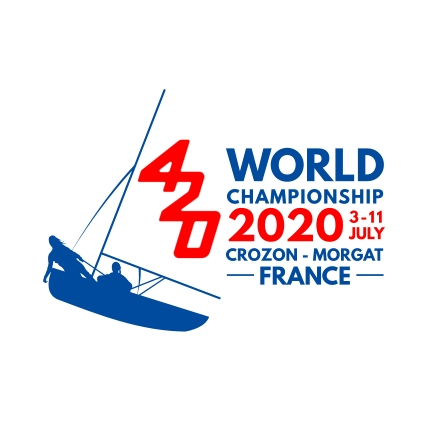